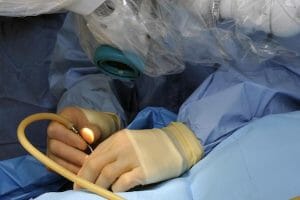 Surgical removal of the palatine tonsils through the mouth due to recurrent infections or sleep disordered breathing.

Cannulating the small natural ducts of the major saliva glands using a small camera in order to diagnose and treat saliva drainage problems often caused by stones and scarring.

Removal of the major saliva gland under the jaw through a cut in the neck, definitively managing recurrent infections or swellings, often from stones, or tumors arising therein.

Removal of the major saliva gland in front and below the ear through a cut in the neck, often due to a mass arising therein.

Botox injections into the saliva glands

Either a total removal of the thyroid gland or partial removal (lobectomy and isthmusectomy) through a low front of neck incision to treat thyroid cancer, non-dangerous but large nodules/goitre or Grave’s disease.

Removal of all the lymphatic structures of the neck to control or prevent cancer spreading, preserving important nerves, arteries, veins and muscles. Many types occur depending on the site and extent of cancer.

Direct laryngoscopy and biopsy, including removal of polyps and nodules

Direct examination of the larynx (voice box) and pharynx (throat) using a metal scope through the mouth, often involving taking pieces of abnormal tissue for laboratory examination, or removing nodules and polyps.

Surgical incision in the lower neck to place a tube in the trachea (breathing pipe), in order to bypass an obstructed upper airway, or to aid in ventilation and pulmonary toilet in ICU patients.

Trans-oral (through the mouth) exposure of a throat pouch that is managed by cutting the abnormal throat muscle responsible for its development with a carbon dioxide laser under microscopic guidance.

Minimally invasive techniques using a microscope and the precision of a carbon dioxide laser to remove cancer completely, preserving as much normal tissue as possible.

Wide exposure approaches to remove large cancers either not amenable to minimal invasive techniques or failed chemo-radiation of head and neck cancers.

Removal of large skin cancers that invade into deep structures of the neck not amenable to superficial removal by a plastic surgeon or dermatologist.

Removal of benign congenital and developmental neck masses and cysts

Open neck approach to remove non-cancer masses that are present at birth or develop at a later stage of maturity as a result of embryological abnormality.